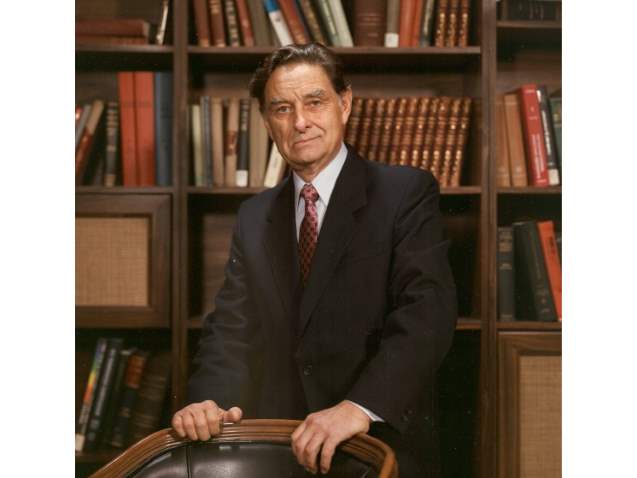 Academician Jordan Malinowski was born on 03.06.1923 in Sliven, Bulgaria. He studied in the American college in Sofia and after graduation in 1943, he took part in the World War II and was awarded a medal. In 1948 he graduated the Faculty of mathematics and physics with specialty “Chemistry” in Sofia State University “Kl. Ohridski” and worked as a research associate in the field of physical chemistry. From 1948 up to 1958 he was a research associate in the Institute of Physics to the Bulgarian Academy of Sciences (BAS). He got his PhD degree in chemistry in 1958 and his Doctor of Science degree in 1969. In 1959 he was elected for an associated professor, and in 1964 – for professor in the Institute of physical chemistry to BAS. In 1989 he was elected for an academician of BAS. He was a founder of the Central laboratory of photoprocesses to BAS (1967) being its director up to 1992, when it was elected for the President of BAS. He remained on this high position till the end of his life in 1996.

Academician Jordan Malinowski began his scientific activity in the field of electro-crystallization under the guidance of academician Rostislav Kaishev. As a research associate in the Institute of Physics to BAS, he obtained substantial results on physical formation of photo-emulsions. He developed a method for differential development which permitted creation of photo-materials with new improved characteristics and which had been applied by many photographic firms. A special place in his scientific activity took simulations of the mechanism of the elementary photo-process for mono-crystals of silver bromide. For this purpose a method was developed for direct synthesis of mono-crystals from super-pure silver halides, which is still widely used all over the world for synthesis of compounds of high purity that are sensitive to light and other radiations.

Further in his career, the interests of academician Jordan Malinowski were focused on study of formation of the “latent image” - an invisible image, formed at illumination of the photo-sensitive material, which is visualized by means of physical and chemical development. The obtained unique results proved the important role of the so called photo-holes in the photoinduced changes in silver halides. These results were in the base of a new theory, which became wellknown in the international scientific literature as a “symmetric scheme of Malinowski”. It takes in account both electrons and photo-holes. It has been established by modeling that one of the rather complicated and unclear processes – action of the developer which distinguishes the exposed from the non-exposed parts of the photo-material – is a special case of the theory of crystal growth. The systematic research made possible clarification of the photographic process also in others photo-sensitive materials, including non-silver compounds. Advanced technologies for photomaterials production have been developed on the basis of highly effective completely dry approach for deposition of silver and non-silver light-sensitive substances by evaporation in vacuum. Practical implementation of the pioneer achievements of academician Jordan Malinowski made possible organization of a new for Bulgaria high-tech field – production of photo-raster transducers.

As a president of BAS academician Jordan Malinowski fruitfully worked for reforming the Academy. He made a lot of efforts to keep the leading position of BAS in the scientific community of Bulgaria and Bulgarian society.
Doctor's thesis of Acad. J. Malinowski (in Bulgarian, .pdf)

Most significant scientific achievement for 2021

Most significant scientific achievement for 2021 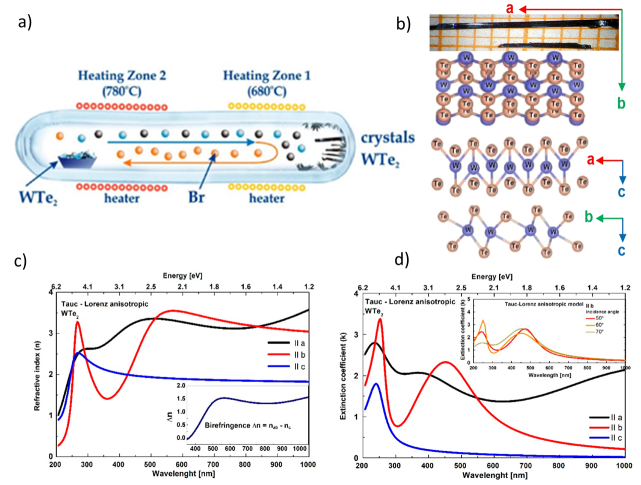 Schematic representation of CVT growth process of WTe2 single crystals and optical anisotropy of the refractive index (n) and birefringence (Δn).
Tungsten telluride (WTe2) single crystals with a two-dimensional (2D) monoatomic structural form (like graphene), characterized by strong covalent bonds within one layer and weak van der Waals interactions between adjacent layers, which determines exfoliation (separation of layers), have been synthesized by the Chemical Vapor Transport (CVT) method. Synthesis of WTe2 is great challenge due to the low chemical reactivity between W and Te. Currently, WTe2 nanolayers synthesis by conventional techniques (chemical vapor deposition, molecular beam epitaxy) allows realization of micron-sized clusters. Alternatively, the unique properties at the nanoscale level are accessible by exfoliation from bulk WTe2 crystals (perfect crystal properties are preserved). Recipes and temperature diagram for synthesis were determined and the bulk WTe2 crystals were analyzed by X-ray diffraction and Raman spectroscopy. An innovative ellipsometric method for analysis and modeling of triaxial optical anisotropy and behavior of optical constants was applied, measuring extremely high values ​​for refractive index (n ~ 4) and birefringence (∆n> 1.6), indicating the presence of surface plasmonic effects. The obtained results reveal the potential of WTe2 for the development of the next generation devices for light modulation with low losses (planar optical elements providing spatial and polarization separation of light), energy storage and in quantum computers (spintronics).
The research is financially supported by the EU project TOCHA (824140), H2020-FETPROACT-01-2018 and published by: Buchkov, K., Todorov, R., Terziyska, P., Gospodinov, M., Strijkova, V., Dimitrov, D. and Marinova, V. Nanomaterials, 11, 9 2262. (2021), DOI: https://doi.org/10.3390/nano11092262
Close

Most significant applied scientific achievement for 2021

Most significant applied scientific achievement for 2021

Schematic presentation of films deposition and testing
Thin composite films of a sol–gel Nb2O5 matrix doped with coal fly ash Na-X zeolites were deposited by the spin-coating method. Fly ash of lignite coal collected from the electrostatic precipitators of TPP “AES Galabovo” in Bulgaria was used as a raw material. Zeolites Na-X were synthesized by ultrasonic-assisted double stage fusion hydrothermal alkaline conversion of coal fly ash. In order to improve both the optical quality and sensing response of the films, zeolites were wet-milled for 60 s, 120 s and 540 s prior to film deposition. It was demonstrated that the duration of milling impacts pore volumes, specific surface area, particle size and morphology, optical and sensing properties of the composite thin films. An optimal milling duration of 120 s was obtained thus achieving both the highest values of pore volumes and specific surface areas of Na-X120 zeolites. This facilitates the vapor condensation in the pores and enhances the sensitivity of the composite films. Very good selectivity toward acetone vapors was obtained: the response is more than 20 times stronger when films were exposed to acetone vapors as compared to exposure to ethanol vapors. Besides, it was demonstrated that composite Nb2O5/Na-X120 films can be utilized for color sensing of acetone vapors. Computer modelling has revealed that a considerable increase of sensitivity can be achieved by incorporation of composite films in Bragg stacks.
The study was in cooperation with Prof. Boycheva’s group from TU-Sofia and was supported by Bulgarian Science Fund under the contract DN 17/18 (2017). The results were published in K. Lazarova, S. Boycheva, M. Vasileva, D. Zgureva-Filipova, B. Georgieva and T. Babeva, Nanomaterials, 11, 2399, (2021). https://doi.org/10.3390/nano11092399
Close

The Institute of Optical Materials and Technologies (IOMT) “Academician Jordan Malinowski” has been established on July 1, 2010 by merging two research units: The Central Laboratory of Photo-processes and The Central Laboratory of Optical Recording and Processing of Information.
The main research goals of the institute are:
⁕ Investigation of photo-induced processes in micro- and nano-sized layers and structures and to develop high-technology novel materials and methods for optical applications in flexible transparent electronics, ecology, biomedicine, food industry, non-destructive testing and cultural heritage protection;
⁕ Training of highly qualified personnel in these areas. Training of graduates and postgraduates;
⁕ Carrying out interdisciplinary research and joint projects with experts from other research units;
⁕ Implementation of the scientific product through innovation and knowledge transfer to industry.◊
Close